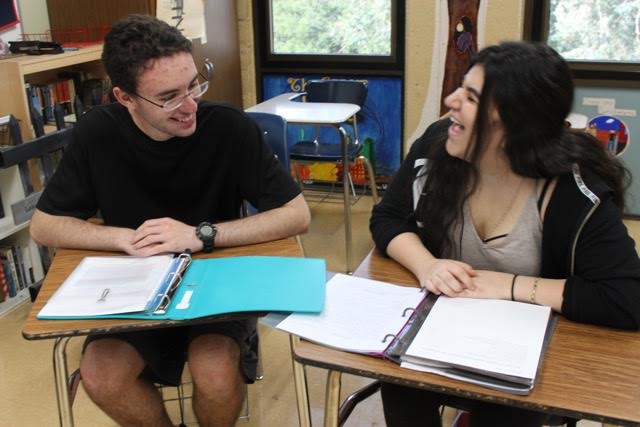 In high school, students begin to grasp their interests that compose who they are. Simultaneously, they begin to develop the ambitions and skills that they will apply to their future careers. The AP Capstone program—which is new to Calabasas—guides students towards their future professions and prepares them for life after graduation. With the first cohort of Calabasas High School students reaching their final semester of the two year AP Capstone program, students are conducting original research in the hopes of improving the world’s understanding on a field of their choice. These fields vary based on each member’s personal passions, with topics ranging from politics to the environment.

Senior Nathan White is making strides in mathematical education research, while junior Alisa Tabaian is focusing on the influence of fairy tales on society.

“I have always loved math, but I know a lot of other people don’t,” said White. “So how can we make it better, and how can I share this joy that I have with others?”

White’s research project focuses on the social aspects of group work in mathematical education. He believes that alternating independent work with group work in both self-chosen groups and teacher-chosen groups is the key to maintaining students’ interest and understanding. In addition to diverse teaching methods, he also theorizes that explaining the reasoning behind formulas and steps in the mathematical process will allow students to actually understand math, rather than simply go through the motions. This will also allow students to apply the information and processes they learn in math class to their real lives.

“If I were a teacher, I would give more group work to give students the ability to express their opinions instead of sitting and writing down notes,” said White. “Students will learn to collaborate and improve critical thinking.”

White, who hopes to be a professor studying math education in the future, believes his true passion will be the key to his success. He hopes to make group work more engaging in a way that students can enjoy while also learning more and achieving more.

Lifelong Disney enthusiast Alisa Tabaian is devoting her year-long research topic to the controversy surrounding surrounding fairy tales. According to Tabaian, many psychologists critique fairy tales for negatively impacting children. She is studying whether or not parents should be exposing their kids to such stories.

According to Tabaian, these harmful stereotypes may have negative effects on the audience’s perspective of the world by making them apply these fictional ideas to real life. In addition, there are also harmful gender roles in some Disney movies that suggest that females need males to save them. However, other people argue that children can better differentiate fact from fiction and these fairy tales should not be treated like the sole influence of a child’s personal values. Furthermore, there are important and beneficial lessons taught in fairy tales, such as the idea that people who are kind get the happy ending, while those who are evil suffer hideous downfalls.

“Fairy tales are important because they help structure children’s imaginations and let them enter worlds where magic is real,” said Tabaian. “I think my [research] might surprise people.”

The original research that these students are conducting contributes to the final project in the two-year AP Capstone program. Capstone students will graduate with a special certificate and—if they complete and pass four outside AP tests—a Capstone Diploma. The AP Capstone program is designed to teach students research skills they can further utilize in future careers.