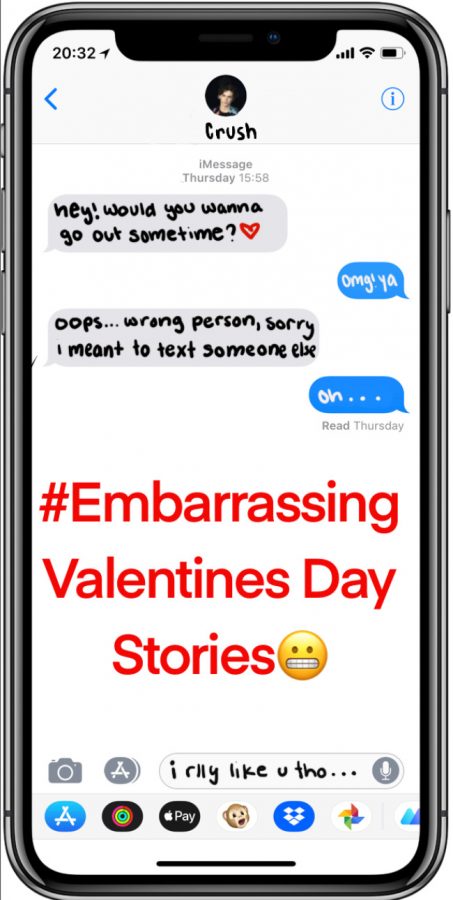 In seventh grade, I had a little relationship that wasn’t really a relationship. I really liked him and he ended up asking me out on Valentine’s Day over text. That same night there was a Bar Mitzvah that we were both invited to and we hugged each other and then never spoke again. -Jasmine Saboorian (News Editor)

Every year for Valentine’s Day my dad decides to get my sister and I a new perfume just to show us that he cares. -Jemma Lipman (Staff Writer)

My boyfriend at the time had asked me to be his valentine so we were supposed to go out for dinner on Valentine’s Day. We ended up going to at least five different restaurants and they turned us down because my boyfriend forgot to make a reservation anywhere. Finally, we found a restaurant that would take us but we still had to wait an hour just to get a table. Moral of the story is make sure to make a reservation on a holiday weekend especially on a day as busy as Valentine’s Day. -Hayley Schneider (Staff Writer)

I am in Youth and Government and every year we go up to Sacramento for a mock trial. This year it happened to be over Valentine’s Day weekend. I was talking to this guy and he was also there for the trip and we were supposed to meet up. Then he wasn’t responding for three hours so I thought he just ghosted me and didn’t want to see me so I went back to my hotel room. Randomly, a few hours later I get a text saying that he was stuck in an elevator and he couldn’t go to dinner. At first I thought it was an excuse but now we’re dating and that was almost a year ago. -Sophie Dodd (Staff Writer)

My girlfriend and I had been dating for around ten months- and this was like freshman or sophomore year, but we ended up breaking up exactly a month before Valentine’s Day. The next week we tried to be friends but it was just too soon so we decided to wait a month and then try and talk to each other again which happened to be on Valentine’s Day. Once Valentine’s Day came around I felt myself dreading the inevitable of talking to her again. Eventually when we started talking I knew the best thing for me to do was to just cut all ties with her and move on. I told her this and we both ended up blocking each other on everything. I know this isn’t your typical happy Valentine’s Day story but every year around this time it reminds me of this awkward and unfortunate situation. -Oliver Litner (Editor-in-Chief)

Last year my friends and I went to this Valentine’s Day party and what I remember the most is that I loved the chocolate fondue and I dipped some marshmallows into it. -Morgan Victor (Staff Writer)

My boyfriend, at the time, and I spent Valentine’s together. We first went to a nice restaurant which was fun to feel grown up and afterwards we went to this special dessert place and bought probably around ten different types of desserts. We brought them home and shared all the unique desserts which were delicious. Overall, it was a simple but memorable night. -Abbie Goldstein (Staff Writer)

In middle school, a boy asked me out to dinner super last minute on Valentine’s Day. We ended up going out- without a reservation. This was my first time going out to dinner with a boy and my sister also happened to be there with her friends. I was extremely nervous and kept calling my sister to meet me in the bathroom to calm me down. We eventually just got to talking like normal and I remember that I ordered soup. He then started telling me all about his other crushes at the time and it was funny. This was my first real experience with a guy, and since then I haven’t experienced anything similar to a date. I will say that I ended up having a good time on my first (and last) date. -Mia Tiano (Editor-in-Chief)