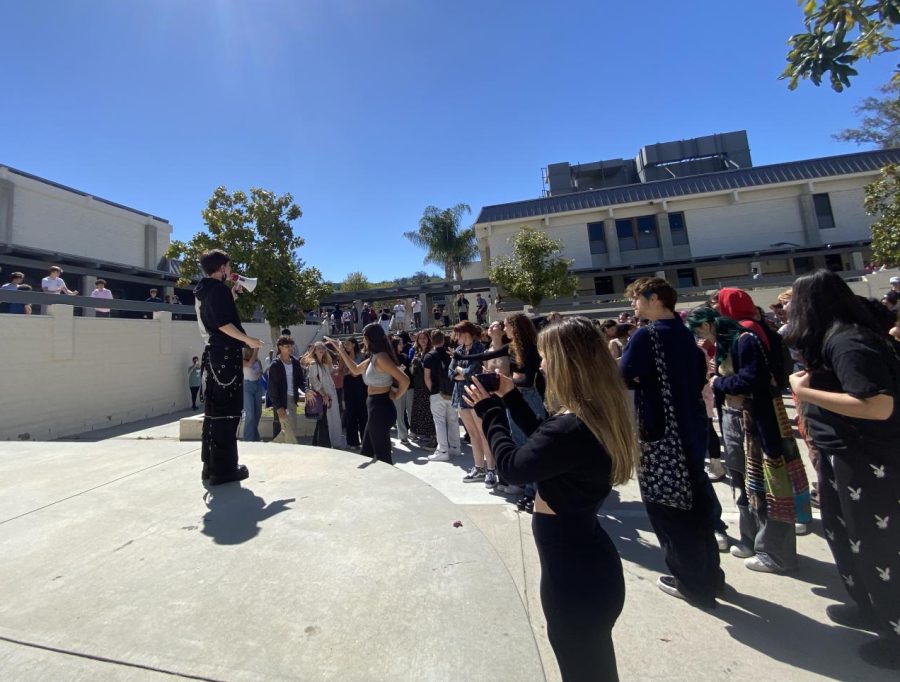 Approximately one hundred students participated in a walkout on Monday, April 4 to protest what they see as a lack of administrative action on behalf of sexual assault victims, and to bring further light to the issue of sexual misconduct among the student body.

The walkout, organized by CHS senior August Davis, was promoted through on-campus flyers and an Instagram account dedicated to the walkout itself.

Davis was inspired to host the walkout after his own experience reporting misconduct to the school. In addition to spreading awareness of sexual assault and harrassment to the student body, Davis’s main goal for the walkout was to bring the administration’s attention to the issue.

“The school does not do a good job teaching consent and teaching [lessons about sexual assault] to people, and this [walkout] is to show [admin] that they need to do a better job,” said Davis.

After the walkout dispersed, administrators discussed what they have been doing on their end to help students who report experiencing or witnessing sexual misconduct.

“We do everything possible,” said Assistant Principal Courtney Johnson. “When we first hear something and it’s coming from a first person [perspective], we will always loop in the Lost Hills Sheriff Department.”

Johnson also stressed the importance of reporting factual information and trying to bring in truthful evidence.

“If you come and report something to me that you heard or something happened to your friend, we then ask that friend because it didn’t happen to you [directly],” said Johnson. “We interview anyone who we are told might have information, and when we find that information out or we find in that truth-seeking mission that there has been harassment or assault committed, we loop in law enforcement when applicable, and there’s also consequences with the student.”

Davis’s speech during the walkout targeted admin for ignoring students’ concerns regarding sexual assault. He pointed out the promotion around school of speaking up when something happens, but complained that admin goes against their own word.

“[Teachers and administration] hang posters on the walls that say ‘See Something, Say Something,’ and how sexual harassment is against the law, but [admin] ignores students when they speak up,” said Davis in his speech. “Calabasas High School cares more about protecting its reputation than protecting its students.”

Assistant Principal of Curriculum Nicki Goldstein acknowledges that, many times, it is their duty as school administrators to keep information confidential and not publicly announced to the student body.

“We are really respectful of the fact that our students are all minors and that they are our students, so confidentiality is super important,” said Goldstein. “No matter what our findings are, we don’t go and report whether or not we found something for the person being accused and for the victim. It’s really to protect both parties, but if it affects them directly, they know what their consequences are or what we are doing to support them, but we’re not going to go and blast that because that’s not professional or productive. We have spent hours upon hours doing investigations for our students, but we don’t get a loud speaker and present all the things that we’re doing because that’s not anyone else’s business.”

Goldstein also recognizes that there are students who are not yet comfortable to speak up about their sexual assault or harassment experiences, and that there are alternative support systems for those who do not yet want to bring the issue to law enforcement.

“People know we’re mandated reporters,” said Goldstein. “People that work in public education are mandated reporters; but if [students] don’t want to get their parents or law enforcement involved, we could hear enough to maybe get them Counseling 360 or the Wellness Center or something to get them support while they’re on campus so they can feel safe and have a safe place.”

While administration appreciates and encourages students to speak up and use their voices for advocacy, Johnson contends that there is only so much that admin can do if there is no evidence to go along with a report.

“I love that we are living in an era where people are empowered to speak out and I know that anyone who chooses to speak out- that’s not easy for them, and I never want to discount people coming forward,” said Johnson. “But I also want to really stress that we need to speak about what we know, and not what we think or perceive. We will continue to do what we know is best for students. We need to hear them, and if they don’t have any solid evidence, then that’s all we have to go with. If they give us something we can use and proves that something did or did not happen, then that’s really helpful.”