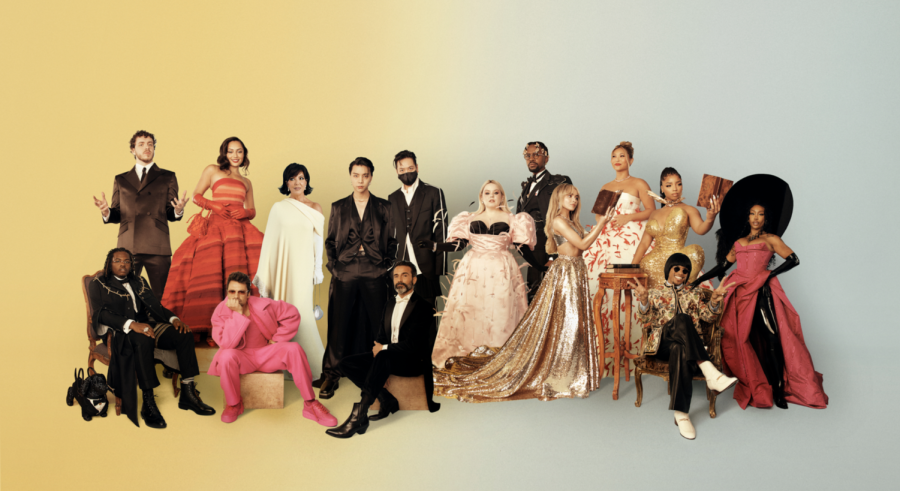 Attended by only the best-dressed A-list celebrities from all over the country, this year’s Met Gala at the Metropolitan Museum of Art in New York City represented the theme of “In America: An Anthology of Fashion.” The theme follows the two-part exhibition in the Costume Institute at the Museum, following the first part in the 2021 Met Gala, “In America: A Lexicon of Fashion.”

Last year’s theme embodied the modern depiction of American fashion and its impact on historical moments, but this year’s theme of an anthology focuses directly on the origins of America and the emergence of fashion in that time period. While the theme is interpreted and portrayed differently by every attendee, the majority of the guests used inspiration from older designer brands that have shaped fashion history; ranging from Anne Klein to Bill Blass, designers like Donatella Versace and Oscar de la Renta recreated some of the American aspects and looks that have made a footprint in fashion. The theme follows the idea of gilded glamour: The idea that the social unrest during New York’s Gilded Age was covered up by the portrayal of wealth and glamor in fashion.

One of the most-worn clothing items on the red carpet was the corset. Especially since Vogue highlighted the history of the corset and how it has evolved throughout history back in Nov. 2021, I was highly impressed by the amount of people who incorporated corset-like aspects into their outfits. Even plain suits were customized to fit to the theme with the addition of the corset into the top half of the suit itself.

Although Oscar de la Renta and Gucci seemed to design similar outfits for some of the attendees, Versace, Yves Saint Laurent and Moschino really went over-the-top while also incorporating the theme into every custom outfit. Jeremy Scott, Creative Director of Moschino, designed different outfits of the same style for a jaw-dropping crew, worn by celebrities like Megan Thee Stallion and Simone Ashley. Despite some of the disappointing looks that had almost no correlation to the Gilded Age, some celebrities really made their mark in Met Gala history.
10. Evan Mock 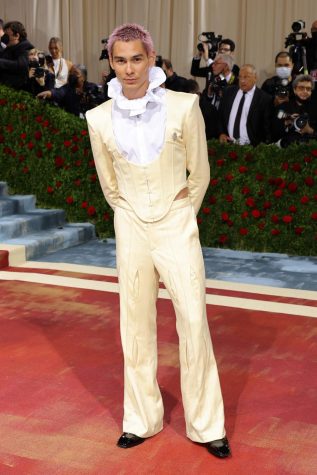 Wearing Head of State, actor Evan Mock was one of the only men at the Met Gala who incorporated the historical theme while also putting a modern twist on the outfit. While most of the male attendees wore suits or black and white outfits, Mock made a statement with his cream-colored satin suit over a white button-up and tulip collar.
9. Lily James 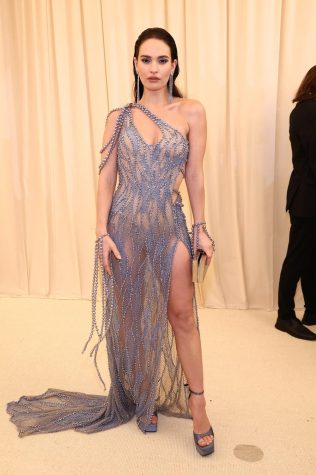 Lily James paid an homage to Donatella Versace on her birthday, wearing a custom Versace dress on the red carpet. With embellished beads and a see-through base, James’ outfit referenced the increase in the country’s wealth during the industrialization age of the 19th century.
8. Bella Hadid 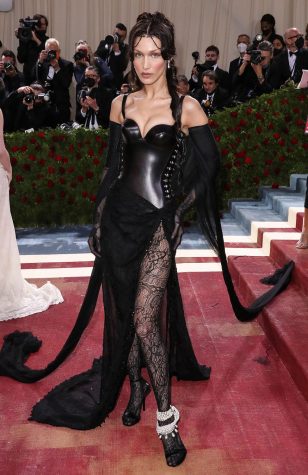 After her absence at the 2021 Met Gala, Hadid came back with a bang in her custom Burberry outfit to represent the anthology of fashion. Hadid kept her risqué sense of style while also incorporating lace detailing and a tight corset to redefine gilded glamor.
7. Jodie Turner-Smith 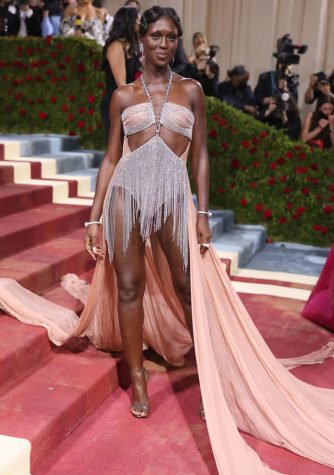 Jodie Turner-Smith was represented by Gucci at her first joint Met Gala with her husband. Showing some skin to keep her outfit more modern-based, Turner-Smith’s outfit was inspired by the Victorian burlesque era when women started to express themselves through flashy clothing items.
6. Kendall Jenner 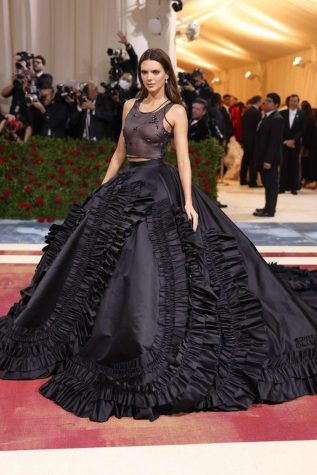 Aside from Kendall Jenner’s extravagant Prada tulle skirt and mesh top, what really pulled Jenner’s look together was her bleached eyebrow look, contrasting her dark features and dark outfit. Following the theme of gilded glamor, Jenner’s big skirt and two-piece silhouette made for one of the best outfits of the night.
5. Lizzo 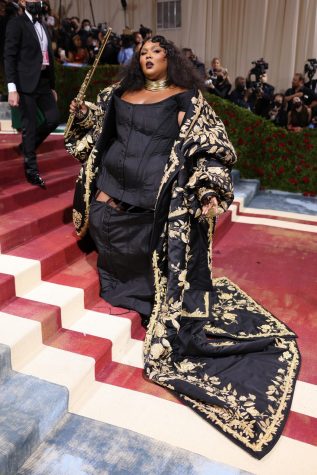 Lizzo took gilded glamor to the next level with her Thom Browne gown with custom gold embroidery. Browne reported to Vogue that the outfit took a total of 22,000 hours to make, as the team wanted to make an outfit that would be breathtaking while also fitting the theme of old-money royalty with the embellishments and corset. Lizzo also brought entertainment to the red carpet as she played her flute accessory throughout the night.
4. Cardi B 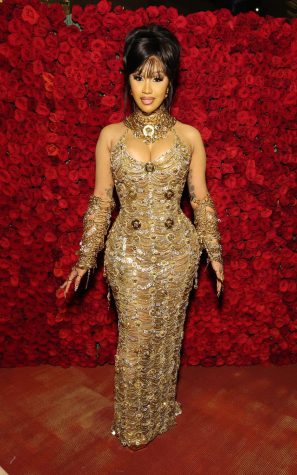 Atelier Versace spent almost 1,300 hours putting together Cardi B’s hand-stitched gown for a high-voltage take on Gilded Age high-glamor. The dress was made of a mile-long chain of golden metal, embellished with the Versace logo. Not only did Cardi fit the theme of high glamor, but she also represented Versace in the most eye-catching way. Aside from the over-the-top outfit, Cardi was accompanied by Donatella Versace herself when they showed up to the steps of the Met in a convertible covered in the brand’s signature gold Barocco print.
3. Alicia Keys 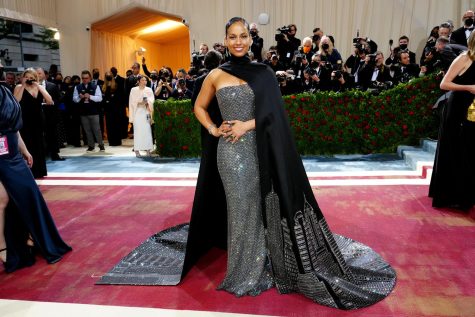 Alicia Keys showed her adulation for New York with her Ralph Lauren gown and cape. Embroidered with 200,000 crystals to outline the skyline of New York City, Keys represented the Gilded Age of New York to embody the empire state of mind. Fitting the theme while also correlating her outfit to her iconic “Empire State of Mind,” Keys truly stole the show on the carpet.
2. Kim Kardashian 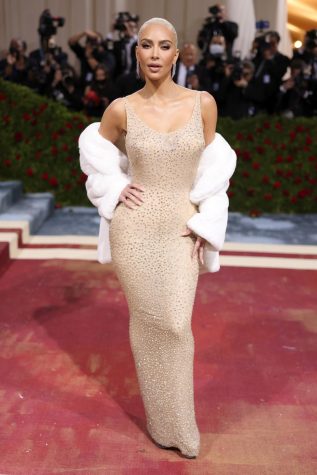 Kim Kardashian had one of the most iconic looks of the night that will go down in Met Gala history. Many people were not impressed with the simplicity of Kardashian’s gold dress, however the importance of the look comes from the history behind it: Kardashian wore Marilyn Monroe’s exact dress when Monroe sang “Happy Birthday” to former President John F. Kennedy in 1962. In an interview with Vogue, Kardashian explained that the idea came to her when she was trying to brainstorm who has represented American fashion as a whole, and Monroe was the first to come to mind. Kardashian was determined to fit into the scandalous dress, as she said on the red carpet that she had to lose sixteen pounds in three weeks in order to properly fit into the dress. Revolutionizing Monroe’s iconic look, Kardashian made yet another mark on the Met Gala red carpet.
1. Blake Lively 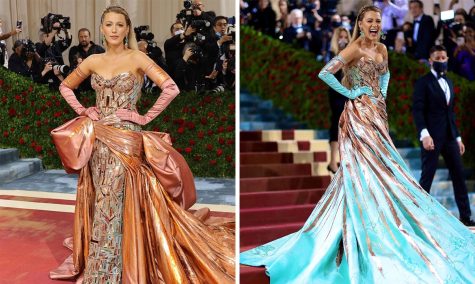 Co-chair Blake Lively executed fashion’s relation with America’s historical moments like no other. The custom Versace dress not only complimented Lively’s figure and had beautiful embellishments from top to bottom, but it also depicted the theme to a tee. She arrived at the gala in the copper-colored gown, and halfway up the steps to the Met, Lively quickly reversed the train to reveal a beautiful aqua side that matched her reversible gloves as well. Lively’s choice of color scheme and tiara accessory was shown to depict the classic historical architecture in New York, mostly channeling the change of the Statue of Liberty’s original copper color to its evolution as the aqua-colored monument that it is today. Being that this is Lively’s fourth Met Gala to attend, she certainly stole the show once again and perfectly represented fashion’s mark on our country.