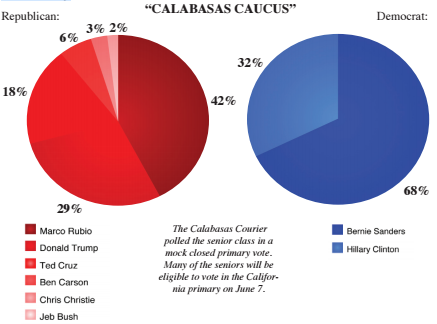 The battle for the presidential nomination is officially underway—the Iowa caucus took place on Tuesday, Feb. 2, and the New Hampshire primary on Feb. 9.

In order to win the official nomination for a party, a candidate must win a majority of party delegates, who are party representatives sent to each National Convention to choose the party nominee. Out of the 4,763 delegates sent to the Democratic National Convention, a candidate must win 2,383. On the Republican side, there are significantly less delegates, only 2,472, and 1,237 are needed to win.

A tight race ensued in Iowa between Democratic candidates Vermont Senator Bernie Sanders and former Secretary of State Hillary Clinton. Although Clinton was declared winner after hours of voting, she never led by more than a slight margin. The final count resulted in Clinton winning at 49.9 percent, with Sanders falling just so slightly behind at 49.6 percent. They split the delegates almost evenly, with 23 going to Clinton and 21 to Sanders.

In New Hampshire, on the other hand, Sanders took home 13 of the 24 delegates. He went in leading in the polls by a wide margin—about 12 percent—and came out victorious at 60 percent.

A win in Iowa or New Hampshire typically provides momentum, something Sanders will need if he as any chance of winning the nomination. Although his campaign has grown rapidly and essentially mobilized young voters, he will still need to win a vast majority of the state primaries. According to CNN, Clinton currently holds 431 delegates, the majority of whom are superdelegates. Although Sanders lags behind with a total of 52 delegates, his success and exposure through Iowa and New Hampshire undoubtedly add fuel to his campaign.

As for the GOP, Texas Senator Ted Cruz took home a win in Iowa, as he ranked at 27.6 percent and received approximately eight delegates. Donald Trump placed second at 24.3 percent and Florida Senator Marco Rubio third at 23.1 percent, and they each received seven delegates. Dr. Ben Carson and Pennsylvania Senator Rand Paul lagged behind at 9.3 and 4.5 percent.

Although he placed second in Iowa, Trump headed into New Hampshire polling at a 31 percent lead, with Rubio and Cruz trailing at 15 percent and 13 percent. Sure enough, Trump won the primary with 35.1 percent of the vote and received 10 of the 23 delegates. After Trump came Ohio Governor John Kasich, who won three delegates and put some life back into his campaign. Cruz and former Florida Governor Jeb Bush split the last four delegates. Rubio, who received no delegates, was believed to have placed poorly because of his weak performance in the GOP presidential debate.

With 17 delegates in total, Trump currently leads the GOP race. But Cruz and Rubio are not far behind, and many voters have yet to support one of the three frontrunners. As more and more candidates fall off the ticket, their respective voters will have to pledge their support to another candidate—which means Rubio, Cruz and Trump still have plenty of voters to win over. Candidates who have already dropped their campaign include Chris Christie, Carly Fiorina, Mike Huckabee, Bobby Jindal, Rand Paul and Rick Santorum.

The general election is a long way off, and the race for the presidential nomination has just begun. The California Primary will take place on June 7, the Democratic National Convention in Philadelphia, Pennsylvania on July 25-28 and the Republican National Convention in Cleveland, Ohio on July 18-21. But as the state primaries continue throughout the next few months, two presidential candidates will slowly emerge from each side—and with the inconsistency exhibited between Iowa and New Hampshire, an exciting race is in the making.