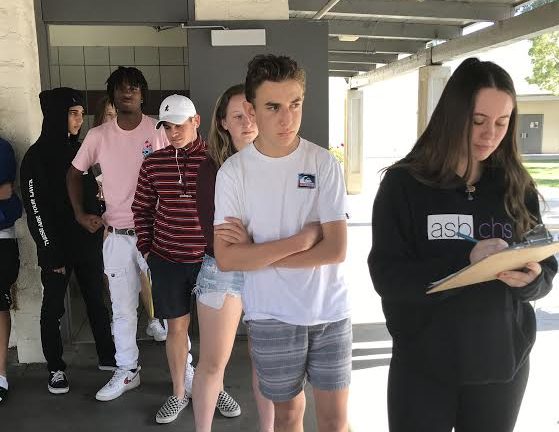 In response to excessive misbehavior inside CHS bathrooms, Administration implemented a new campus-wide bathroom policy. A faculty meeting on Jan. 11 sparked a new set of regulations based on current injunctions at Agoura High School.

First, CHS Principal C.J. Foss implemented a sign-in sheet. Before entering the bathroom, students must provide their full name, current teacher, student ID, time in and time out. This frustrates many students as long wait times prohibit them from accessing the bathroom with ease. Because there is only one line to sign in or out, students who have already used the bathroom are forced to step back in line to sign out, waiting for everybody in front of them. Consequently, students are forced to miss more class time than usual, as the time spent in line is considerably longer than the time spent in the bathroom.

“I think the policy is ironic because it is trying to prevent ditching and missing class time, but students miss more time waiting in line,” said senior Nika Chegenizadeh. “Restricting bathroom use is not the way to go.”

Foss intends to use the sign-in sheets to review student bathroom activity at the end of each day, searching for specific students who constantly abuse the bathroom priveledges provided by teachers. Rather than sustaining a school-wide policy, Foss hopes to find out who in particular abuses the rules to develop a new policy tailored to only certain individuals. According to Foss, these students would no longer be able to use bathroom passes without the accompaniment of a campus supervisor.

“The manpower that this is taking is not great,” said Foss. “I am looking at hiring another campus supervisor to help out, and that is going to cost [the school] $8,000 for the rest of the year.”

Initially, due to the lack of campus aides, Administration kept only one bathroom open to students during class times. All other bathrooms were accessible before and after school and during nutrition and lunch. Eventually, all bathrooms—except for the one in the upper quad—were locked during all hours of school and were only accessible to teachers.

Students vandalized the once-spotless bathroom in response to the policy and began to spread rumors regarding smoke and nicotine detectors. Foss later debunked these allegations, stating she had never heard of such devices.

“I’m concerned about nicotine, but [what about] marijuana?” said Foss. “I don’t think kids are aware that it is not healthy to do this.”

To avoid additional distractions, a handful of teachers have adopted individualized bathroom policies. Senior English teacher Chimei Fregoso, for example, no longer allows bathroom use during the first and last 15 minutes of class, as well as during lectures and any tasks deemed imperative and instructional.

As of now, all previous bathrooms are open and accessible at all times. The upper quad bathroom, on the other hand, is still under close watch and utilizes the sign-in sheet system. On top of the bathroom-related issues, the JUUL and similar devices continue to sweep the community with concern. The CHS Administration anticipates the termination of the policy once there is a sense of control over the situation.

“I don’t like having restrictive policies, but when there is a problem, I do need to address it,” said Foss. “Then, we can try to move back once we feel like we’ve got some kind of fix on it.” •