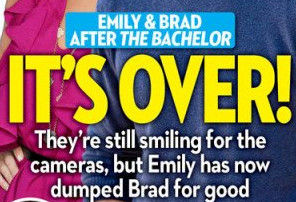 “You are my once-in-a-lifetime.  Please give me your forever.  Please let me be your best friend.  Please give me the opportunity to love you for the rest of your life.  Will you marry me?”  What Brad Womack said to his lover Emily Maynard from Season 11 of The Bachelor seems to be filled with immense love, passion and faith.  As romantic as this ardent vow of love appears, commitments seldom last in these matchmaking shows once the “true” reality settles.  Brad and Emily eventually broke up after the show, forever destroying their promises and regressing back to the way they were before the show: single.  The reality is that people cannot find true love in matchmaking shows.  People show up with ulterior motives, leaving the woman or man feeling heartbroken and desolate.  Participants will have a difficult time finding true love as they are under the spotlight and television writers make their dates unnatural.  Additionally, the time and setting of matchmaking television shows are far too contrived for the contestants.

Dozens of male or female competitors come on these television shows with underlying motives.  Although some suitors may be on the show to indeed find true love, most are there simply for the fame and money that come with the phenomenon.  Because material gain is extremely prevalent amongst these types of competitors, they use the show as a platform to television or film roles, overriding the bachelor or bachelorette’s sentiments.  To avoid being heart-broken, a person should have realistic expectations of finding true love because the sustainability of these types of relationships is extremely low.

“Matchmaking shows on T.V. over-exaggerate relationships to attract viewers and make money, but I believe it is all just for show,” said sophomore Aaron Goldberg.  “It is impossible to have a truly special relationship when the couple is being judged by the media and people.”

A couple can never establish love under the harsh glare of the spotlight.  The primary purpose of television shows like The Bachelor or The Bachelorette is to obtain high television ratings, meaning that the show directors script the dialogue among the contestants.  This makes the contestants’ dates pretentious and superficial, and these constraints push them to act a certain way.  With false dialogue and forced emotions, true love can never prevail as the person cannot express his or her feelings naturally.  Love should blossom with ease and comfort, not under intense pressure to conform to the demands of the television writers.

Also contributing to a person’s relationship takes time.  Deep love can never flourish in such a brief period of one and a half months.  Getting to know a person within this short time is difficult, especially if one must compete with several other contestants.  According to The Lifestyle Pole, the average person dates three and a half years before getting married.  Three and a half years is a stark contrast to a one and a half month television season.  A substantial amount of time with the potential partner comes with the true trials and tribulations of the relationship, which make the couple even stronger.  Matchmaking television shows, on the other hand, are situated in romantic, tropical getaways for only a month.  This setting and time causes the person to lose touch with his or her reality.

In truth, matchmaking television shows do not lead people to true love; in fact, the idea is just a ploy to earn positive television ratings and a substantial profit.  Unfortunately, the manner in which these television shows are depicted gives audience viewers and participants a false promise of perfect love each episode.  As of now, only five of the 24 couples from reality television shows are still together, representing a high rate of unsuccessful relationships.  True love only comes when the partner cares for the well-being and happiness of the other person and time will only add to the intensity and passion within the couple.  If the concept of love is based on physicality and personal gains, the relationship is bound to face disastrous consequences.