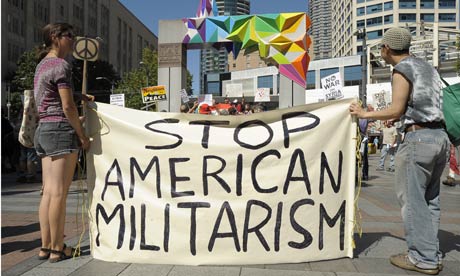 When people think of the United States, superiority in international relations, economics and the military comes to mind.  After victories in World War II and the Cold War, the U.S. exerts its predominance and power in many global conflicts.  The justification for this is that the U.S. is responsible for preventing any major conflict that could potentially threaten the world.  However, there are many serious economic, military and political drawbacks that essentially weaken America as a whole.

The U.S. is in serious debt due to excessive investments of time and money in other countries’ incidents.  Ultimately, intervention does not yield any benefits in the long run.  For example, America wants to meddle in Syria’s issues to resolve the political upheaval; however, this intervention would cost a significant amount of money.  According to washingtontimes.com, America’s total debt is a little more than 17 trillion dollars, and upholding the American military in Syria would amount to an additional 4 trillion dollars.  Before solving other countries’ issues, the U.S. needs to resolve its own economic disparities.  Although America wants to intervene in Syria for humanitarian reasons, meddling in Syria’s affairs is futile because the U.S. would not receive any monetary gain that would perhaps lessen the debt.

“I think we have to solve our own problems first, and once we get our country’s issues sorted out, we should help other countries,” said freshman Chloe Beddows.

Military interference is violent and pointless.  During the Vietnam War, the U.S. intervened in order to stop the spread of Communism.  In the end, this move proved to be a significant political blunder.  The U.S. expected to win the war, but constant guerilla warfare attacks made by the Vietnamese troops completely crushed the American army.  There was no need for the U.S. to intervene because the Vietnamese army had better tactics.  As a result, America could not fulfill a capitalist regime in Vietnam, and yet again, thousands of soldiers died in the war.  More recently, after President Bush’s statement regarding nuclear weapons in Iraq, the U.S. wanted thousands of troops to risk their lives so that the nuclear weapons could be removed and Iraq could transition into a democracy.  However, as America failed to institute a democracy in Iraq, the war lasted without a decisive victory.  Thousands of U.S. soldiers and Iraqi civilians died, and the conflict unnecessarily prolonged the war.

America’s main concern with international politics is gaining natural resources such as oil, money and political hegemony.  America secures a foothold in other countries by stating the interference is due to ethics.  If this statement were true, then America would provide aid to many other troubled nations such as Sudan.  In this day and age of international competition, the U.S. only desires economic and political gain so that the nation can maintain its status quo as a superpower.

America’s intervention in other countries’ problems has proven to be pointless.  The nation’s status as a world superpower does not justify the intervention and the U.S. should not try to exert its superiority.  The positive consequences will not compensate for the negative outcomes and will ultimately lead to America’s downfall.