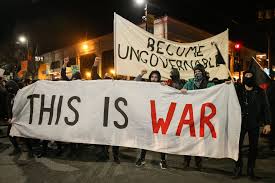 “The Founding Fathers’ instructions were clear: the right to free speech includes bad speech,” said journalist David Ignatius. “It means tolerance of ideas that many find obnoxious.” Although the 1st Amendment was added to the United States Constitution in 1791, some people still seem to struggle with defining “free speech.” The balance of freedom of speech and freedom of protest is difficult to achieve, as exemplified at University of California, Berkeley last month.

When conservative provocateur and former Breitbart editor Milo Yiannopoulos was scheduled to speak at the campus, students organized a protest that quickly turned violent, leading to $100,000 of damage. Regardless of whether the destruction was a mainly result of student activism or anarchist outsiders, the university cancelled Yiannopoulos’ speech because of threats to his wellbeing.

“A divided campus—which once incubated the ideals of the 1960s—was sent into lockdown as it struggled to balance inclusive values with its legacy of fighting for the right to voice [one’s] opinion, however ugly it may be,” said Rolling Stone contributor Matt Saincome.

According to CNN, at least six people were reportedly injured during the riots, including a woman donning President Trump’s signature “Make America Great Again” hat who was pepper sprayed while being interviewed. So, while the Berkeley protesters claimed to be speaking out against “hate,” they actually promoted the very thing they claimed to oppose in the process.

“What actually hurts people is… murder, violence, that kind of stuff,” said Yiannopoulos during an interview with Bill Maher, another strong advocate of free speech. “Mean words [do not] hurt people.”

Now, Yiannopoulos has said some pretty radical things, earning him a fair share of media controversies. From his harsh stance on Islam to his brutal ad hominem attack on the female Ghostbusters movie, the self-proclaimed “troll” has sparked rage out of members of both the left and the right. He was even kicked off of Twitter for violating their rule prohibiting “participating in or inciting targeted abuse of individuals.”

“This is the end for Twitter,” responded Yiannopoulos. “Anyone who cares about free speech has been sent a clear message: you’re not welcome on Twitter.”

Despite Yiannopoulos’ extreme opinions, he should still be entitled to free speech as long as he is not inciting violence. By law, the Ku Klux Klan is allowed to rally peacefully. Even though sane people denounce the Klan’s racist beliefs and reject their legitimacy, they should still defend their right to free speech because when the government starts policing language, it leaps toward totalitarianism. Some people argue that by providing people like Yiannopoulos a platform to speak, the media is dangerously normalizing hate speech. While these people have reason, restricting Yiannopoulos’ speech is perhaps even more dangerous. Calling him a “racist” and a “bigot”—even if he is one—will also not help solve the problem. Rather than fighting hate with hate, protesters should utilize free speech’s most valuable tool: logic.

“Free speech gives [people] the ability to react vigorously with effective arguments and expose the weakness and misdirection of the other side’s claims,” said political commentator Rush Limbaugh.

UC Berkeley is not the only place Yiannopoulos was protested against. Upon hearing that the Breitbart editor would be appearing on the panel on an episode of Real Time with Bill Maher, Jeremy Scahill of The Intercept cancelled his own scheduled appearance on the show. His reason: the show would provide an audience for Yiannopoulos’ “racist, anti-immigrant campaign.”

“If Mr. Yiannopoulos is indeed the monster Scahill claims—and he might be—nothing could serve the liberal cause better than having him exposed on Friday night,” said Maher in a statement reported by Entertainment Weekly.

On the show, Maher and Yiannopoulos jeered about Scahill’s cowardly decision to cancel his booking. Maher criticized him for having “fantasy” views that divert from true liberal principles.

“If you don’t show up to debate, you lose,” said Yiannopoulos on the show.

In other words, the way to combat hateful speech is not to avoid it, but rather to confront it. Ultimately, if Scahill felt that Yiannopoulos’ speech was dangerous, he should have fought against it. Instead, he sat on the sidelines and, in result, gave Yiannopoulos more publicity and therefore a bigger platform.

College campuses have been notorious for suppressing free speech. The University of New Hampshire recently published a list of “problematic” words of which they discourage the use. The university suggests that students refrain from describing overweight people “obese” and instead refer to them as “people of size.” The word “healthy” is apparently offensive to disabled people, and the word “poor” should be replaced with “lacking advantages that others have.” The list also deems the word “America” unacceptable. Many campuses have also adopted “safe spaces,” locations on campus where students can feel unthreatened and escape susceptibility to criticism or harassment. These establishments instill the belief in students that they should not have to confront any other opinion besides their own. The creation of “safe spaces” and the increasing political correctness at universities have caused many comedians, including Jerry Seinfeld, Chris Rock and Larry the Cable Guy, to refuse performing on campuses. Students should have to confront disagreement of thought—even if it makes them uncomfortable—because it is representative of America and of free speech. In the real world, society does not cater to the individual and truth takes precedence over hurt feelings.

Free speech does not mean “free speech when it is agreed upon.” Part of the beauty of free speech is the discomfort associated with dissenting opinions. If only one viewpoint was promoted in America, the country would be no different than a dictatorship. Thus, instead of rendering it impossible for Yiannopoulos to express his beliefs at UC Berkeley, the protesters should have let him speak.

“Ignorant free speech often works against the speaker,” said author Anna Quindlen, “[which is] why it must be given rein instead of suppressed.”