Opinion: Social media influencers should not be granted boxing platforms 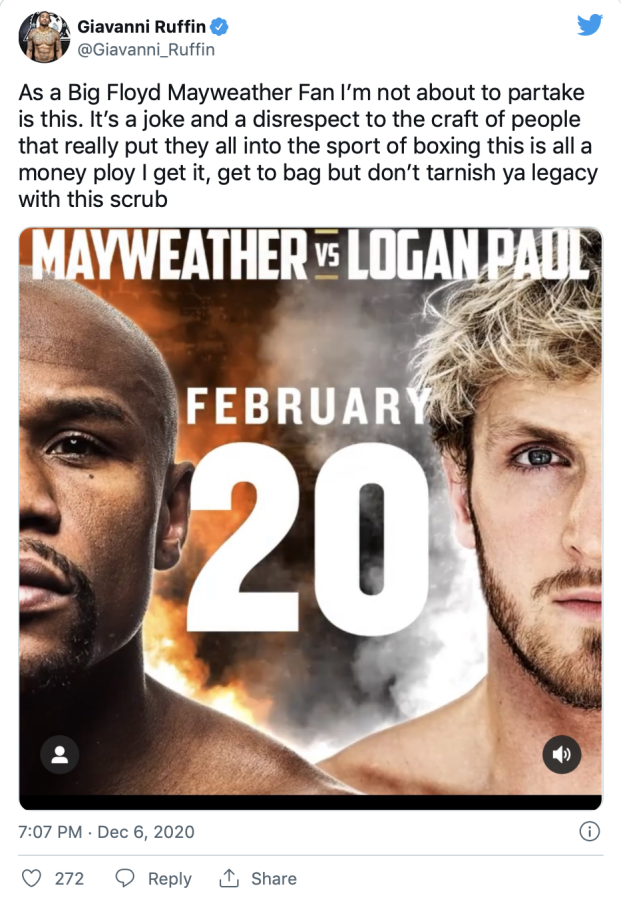 For years, boxing has been one of the most respected sports, as its training is intense and potent. Recently, social media influencers that have little-to-no boxing experience are getting booked for major fights, even though boxing platforms traditionally take a long time to be able to gain.

Influencers from apps like Tik Tok and Youtube are fighting for a bigger fan base online, but they are also fighting for the respect of UFC fans globally. Although this may seem like a fun and entertaining event, it can appear controversial and unfair to the boxing community.

In past years, there have been numerous social media fights. Originally, Youtubers Logan and Jake Paul and KSI and Deji started the trend of social media influencers boxing. Following in their footsteps is Social Gloves, a boxing event that pitted top YouTube stars against TikTokers. Influencers Bryce Hall and Austin McBroom have followed in the Paul brothers’ footsteps; they were the main fighters and publicity seeds of the fight lineup. According to Complex, both Hall and McBroom signed a $5 million contract for their fight.

Meanwhile, UFC has three salary tiers: low, medium and high, with the lowest earners taking home between $10,000 and $30,000, and the highest tier raking in between $500,000 and $3,000,000 per fight. This goes to show that the well-respected UFC fighters would not make nearly as much money as the influencers did in their matches.

Multiple-time world champion Floyd Mayweather took on Logan Paul in Miami, FL in June of 2021. However, this fight influenced fans to begin questioning how far is too far, considering it was Mayweather’s return to the ring in the U.S.

“As a big Floyd Mayweather fan, I’m not about to partake [in] this,” said former athlete Giavanni Ruffin in a Tweet. “It’s a joke and a disrespect to the craft of people that really put [their] all into the sport of boxing. This is all a money ploy I get it, get to [the] bag but don’t tarnish [your] legacy with this scrub.”

Although celebrity matches between professional and nonprofessional boxers have been around for quite some time, the most recent wave of fights arguably holds the biggest threat to the seriousness of the sport.

“YouTubers vs. TikTokers boxing is the hottest sport for a new generation,” said SB Nation. “These kinds of fights represent an existential threat to traditional combat sports. It’s not like those sports will vanish overnight, it’s about whether this new generation will ever care about fighters who aren’t social media celebrities.”

Although it is evident that the fights are mostly all a publicity stunt to gain more of a following, the mockery of the sport is resulting in influencers making thousands of dollars off of a substantial and respected sport. It is unfair to those who have trained so hard their entire life to gain boxing platforms. Not only is this dangerous and consequential, but disrespectful and quite contentious.