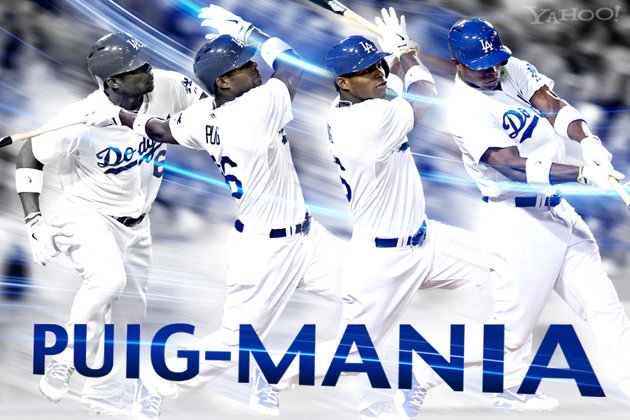 The Dodgers are the hottest team in baseball right now; they have turned their season around 180 degrees.  On June 3, the team was in last place in the National League West at 7.5 games back with a record of 24-32.  Since then, they have taken over Major League Baseball by going 90-66 as of Sept. 24.  The team now has now clinched the National League Western Division.  The Dodgers have not won the division since 2009, so fans are ecstatic. The main reasons for this turnaround are the addition of Yasiel Puig, a 22-year-old rookie from Cuba, and the fantastic play of three-time all-star pitcher Clayton Kershaw.

Many scouts formed high expectations for Puig by saying that they have not seen a talent such as Puig come into baseball for a long time, but no one could have foreseen the turn of events that followed his arrival.  Puig made an immediate impact on the team when he went two for four and displayed his strong arm by making an amazing throw to end his first game.  But he did not stop there; in his second game he hit two home runs and recorded five runs batted in.  A couple days later, he hit a grand slam home run and by the end of his first week, he was named the National League Player of Week.  His success has also generated a domino effect, as veterans Hanley Ramirez, Adrian Gonzalez and Juan Uribe started to heat up as well.

“[Puig’s attitude is] infectious [and it] seems like there’s a joy in his game,” said Don Mattingly, the team’s manager.  “It’s the way you’re supposed to play.  He just looks so fresh [and] that’s what gives our guys so much energy.”

As the season has progressed, some of the Dodgers began to catch on to Puig’s energy on and off the field.  Whenever a good play is made, the crowd is sure to see Puig, Ramirez, and Uribe dancing and joking around in the dugout.  Backed up by extraordinary pitching by Clayton Kershaw,  the Dodgers managed to pull off a 42-8 stretch to end the summer.

Kershaw has put together a season that is worthy of a Cy Young Award, an award given to the best pitchers in the league.  He currently leads MLB with an earned run average of 1.88, walks and hits per inning pitched of .922, and wins above replacement of 7.1.  The pitcher has always been phenomenal, but now the Dodgers are actually putting up runs; Kershaw is 51-0 when his team scores four or more runs.  With Kershaw and dynamic pitcher Zack Greinke, the Dodgers will be a difficult team to slow down with the playoffs just around the corner.