Varsity girls basketball aims to continue on a path to success 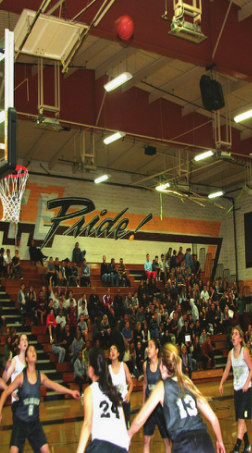 “Through my hard work and dedication to the sport I have improved mentally and physically. I hope to win CIF and league this season.” – Winter

“In any game, winning comes from the heart of the players. If we all have the same passion to win and we all do what we’re supposed to do, there’s no doubt that we can win.” -Nguyen

Ever since the girls basketball team made it to California Interscholastic Federation finals and the second round of state playoffs last year, they have aimed to become more successful as a team.  This year’s team is hoping for a repeat of their success last season.  Each of the players are determined to put in more effort to improve their game.

“This season I hope to continue our legacy from last year and reach playoffs again,” said varsity co-captain Jackleyne Nguyen.  “Our coach Jamie Rauchwarger changed the culture in Calabasas basketball, and I don’t plan on Calabasas girls basketball being a one-hit wonder compared to last year.”

The girls put in many hours of practice each day to perfect their skills, and their practices are generally two to three hours a day, six days a week.  Practice consists of conditioning, skill training and scrimmaging.  Coach Rauchwarger wants her team to be trained and conditioned well in order to be competitive with their rivals.

“My personal goal for the team is for them to be in the best shape comparatively to every team we play,” said Rauchwarger.  “I expect us to finish in the top half of our league and make the CIF playoffs.”

The 2013 varsity starting lineup offers promising players with remarkable talent.  Nguyen is a returning starter who averaged the most rebounds in the Marmonte League last season and also made Second Team All County.  Varsity co-captain and Courier member senior Ellie Berke has been playing on the varsity team ever since freshmen year and is a leader on and off the court.  In addition, Taft High School transfer junior Tal Sahar is a lights out shooter who provides range with her three-point shooting.

“At first I was worried that I wouldn’t fit in or that people already had their groups, but after the first few days at Calabasas my worries went away, and I am really happy I transferred into Calabasas,”  said Sahar.

In addition, sophomore Rojeen Sharifi is a first year varsity player and has worked hard to become the starting point guard.  While junior Rana Rod played more of a supporting role last season, months of intense training have made her a starting post this season.  Junior Anna Winter is a returning varsity player who plays post and has contributed a lot of time and effort to basketball.  Also, junior Carine Rosenberg is a first time varsity shooter, and she is known to be a very charismatic person on the team.  The girls are sure to gain positive recognition this season through their exceptional talents.