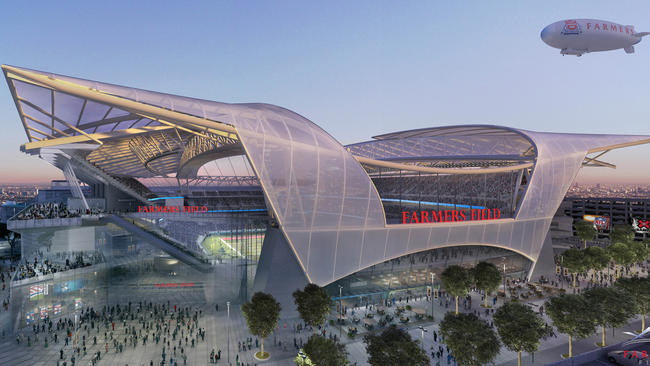 Los Angeles sports fans have had plenty of professional sports teams to cheer for over the years. The Lakers, Kings, Galaxy, Clippers, Angels and Dodgers have generated a lot of excitement for locals, but there seems to be one sport that L.A. wants more than ever: football. Exactly 20 years ago, the beloved L.A. Raiders packed up and headed to Oakland. When the Raiders won the Super Bowl in 1983 they united the city. Though the black and silver magic has faded from the memory of football in L.A., the idea still teases fans. Recently, Hollywood Park developers decided to build a $2 billion National Football League caliber arena in Inglewood regardless of whether an NFL team decides to transfer to the city or not. There is a rumor that the St. Louis Rams could make a return to L.A. Arguably the NFL’s worst team the Jacksonville Jaguars could be an intended target as well. While this might seem like a hopeful idea for most fans, the plan is risky and flawed. Constructing a massive venue in the middle of the country’s second highest populated city would increase traffic congestion, waste millions of dollars and potentially let down the anxious L.A. locals.

Building a new multi billion-dollar stadium could waste money especially since professional football is the priciest of all sports in the United States. According to Forbes Magazine, 30 of the top 50 most expensive sports teams in the world are NFL teams. The only two football teams that are not on the list ironically are the Jacksonville Jaguars and the Oakland Raiders. The Saint Louis Rams are the fourth least expensive NFL team and are ranked 45 on the Forbes list. However, any professional sports organization in L.A. would instantly cost a fortune. Regardless, organizers are insisting on building even without a team.

“We are not dependent on that commitment in advance,” said Chris Meany of Hollywood Park Land Co. in an interview with the L.A. Times. “We are prepared to start even if we haven’t finalized the details of what that team would be.”

An NFL arena in a heavily populated city would not only cost developers a fortune for construction but for city disruption as well. Road closures and construction grants would add to the overall price and anger busy civilians. If a team does not claim the stadium by the time it is built, organizers would have to pay even more to cover maintenance without accumulating profit.

Another issue with construction is the area in which the arena would be built. The location of the lot is inconvenient and would disturb locals during formation. Streets would become congested, as road closings would torment the 110,000 people living in Inglewood. The new stadium would stand beside the Staples Center, another major entertainment venue downtown. Inglewood does not have sufficient infrastructure to support its people as well as the arena. So much incoming traffic combined with the city’s high population and poor roads could make L.A. a nightmare on the weekends.

Perhaps the worst part of this football hysteria is the negative effect that it could potentially have on millions of hopeful fans. All cities hope for the best for their teams but L.A. fans expect the best. The sight of a grand and empty football stadium would crush anxious supporters. L.A. deserves an NFL team. This generation of Los Angeles kids has never had a football team to support. Sure the San Francisco 49ers and San Diego Chargers are close, but they are nothing compared to having a hometown team to cheer for like the Raiders of the 80s.

While the city would like to believe in the notion that, “If we build it, they will come,” expecting too much could devastate L.A. Until an NFL team announces their transfer to L.A., plans to build a costly arena should be paused.