Caroline Canales golfs her way to the top 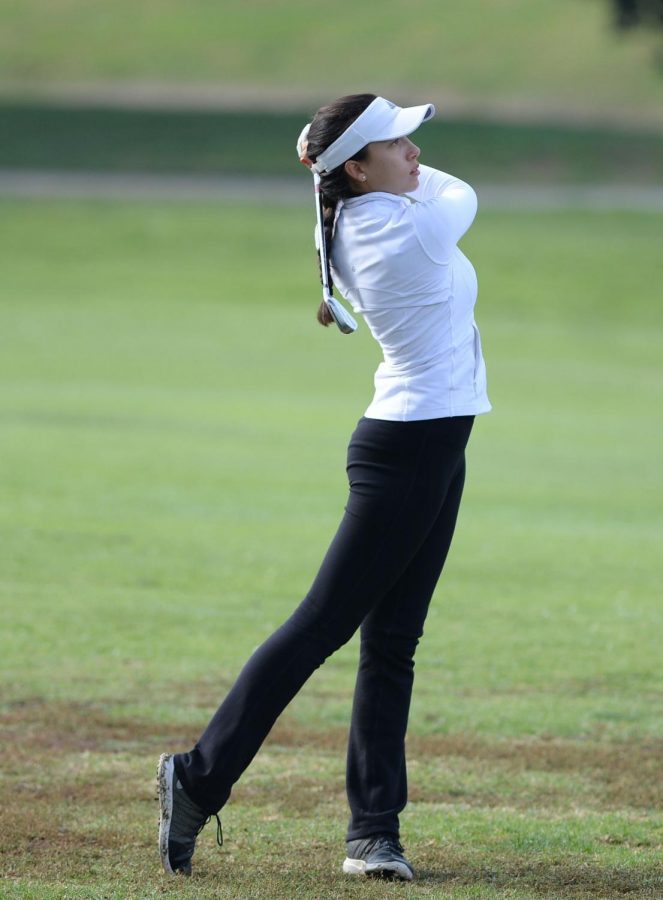 Caroline Canales, known for her poise and consis- tency, is of cially the best high school women’s golfer in the state of California. Not only did Canales domi- nate the Marmonte League championship, but she also captured the CIF state individual girls golf champion- ship this November. In recognition of her talent, Cana- les was named Daily News Girl Golfer of the year.

Golf is extremely dif cult to pick up, even for the most talented, making it quite discouraging at the start. Caroline was not an avid golfer from day one, but was instead introduced to the game by her dad when her soccer career came to an end. Gol ng runs in the Ca- nales family, as her older sister, Olivia, plays as well. The two sisters enjoy playing together as they regular- ly challenge and push each other to be the best they can be.

“I think Olivia has helped Caroline immensely with her development as a golfer and as a person,” said CHS golf coach and social studies Lance Novak.

Canales’ strong passion and drive has helped her grow as an athlete and master the sport. Through golf, Caroline can express her competitiveness and drive to succeed by challenging herself every match.

“My favorite part about the sport is that it is an in- dividual sport, so it directly re ects the time you spend on your game,” said Canales.

Canales’ most memorable moment in her golfing career was this past August when she participated in the U.S. Women’s Amateur in Mississippi. Canales shot a 68, an exemplary score, to qualify into match play. After winning three matches in this portion of the tournament, she advanced into the quarternals where she was matched up against fifteen-year-old Meghan Ganne from New Jersey. By competing against other college-level players such as Ganne, Canales was able to experience an advanced level of play, igniting her competitive nature.

When Canales is not on the course she strives to spend time with her friends. Since golf and school require most of her attention, she no lon- ger has time to pursue other activities and hob- bies that she used to be involved in such as pi- ano. Canales is extremely dedicated to both her academics and athletics and hopes to continue her expertise in golf in her future.

Canales’ outstanding play has caught the eye of many colleges and is leading her to a Division I scholarship. Canales began the recruiting pro- cess a few years ago and is currently focused on making her nal decision. Canales is in a great position after securing several college offers for her to select from.

“I am very excited to announce my college commitment in the near future and play golf at a high collegiate level,” said Canales.

When coach Lance Novak rst saw Caroline swing a golf club, he knew she had a special tal- ent. Novak has worked with Canales to develop her skills, allowing her to grow as an athlete ever since she joined the program.

“Caroline is the most talented golfer I have ever had the pleasure of coaching,” said Coach Novak. “What sets Caroline apart from other golfers is she enjoys the process of getting better and works extremely hard at constantly trying to improve.”

Canales has her sights set high and would consider a post-college professional career. Cana- les’ resume has proven her talent and she is ready for the next step in her gol ng career.•