Where are they now? Coyotes at the next level 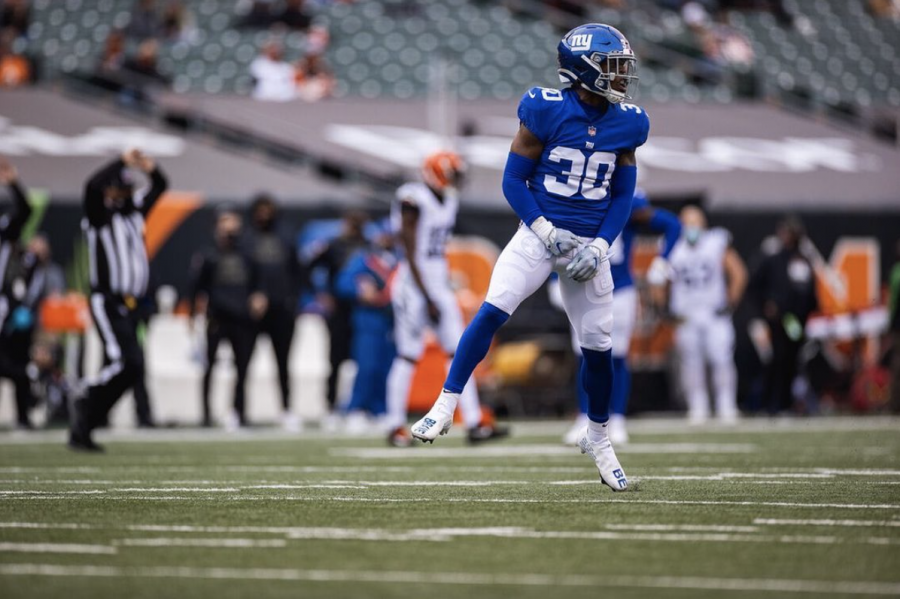 When Casey Clausen took over the Calabasas football program in 2014, a new era began for Coyote Football. Due to the success led by Clausen and followed up by Chris Claiborne, many Coyotes are playing football at the next level, including both college and the NFL.

Darnay Holmes
Darnay Holmes was the leader of the Coyotes defense after transferring to Calabsas from Newbury Park, before heading to UCLA. In his three years as a Bruin, Holmes had 120 total tackles and eight interceptions, two of which were returned for touchdowns. Holmes’s best season came his sophomore year when he had 48 total tackles and three interceptions. He decided to forego his senior season with the Bruins in order to enter the 2020 NFL Draft. Holmes was selected in the 4th round (110th overall) by the New York Giants. Holmes followed with a successful rookie season. He played in eleven games and was the main slot cornerback. Holmes had 30 total tackles, to go along with 1 fumble recovery, 1 interception and 2 QB hits.For the first few weeks of the season, Holmes played roughly thirty to fifty percent of the snaps. Towards the end of the season, he played about seventy to ninety percent of the snaps. Unfortunately, Holmes dealt with two injuries this past season. A neck injury suffered in Week 6 kept him out of two games and an ankle injury kept him out of Weeks 14 to 16.
Tristan Gebbia
When leaving Calabasas in 2017, quarterback Tristan Gebbia thought he would be playing his college football for the University of Nebraska. In 2017, Gebbia redshirted for the Cornhuskers. Entering his redshirt freshman year (2018), Gebbia was in a quarterback battle with true freshman Adrian Martinez. After losing the QB battle, Gebbia announced he was transferring to Oregon State. Although Oregon State was not on Gebbia’s shortlist coming out of high school, Oregon State head coach Jonathan Smith recruited Gebbia to Washington while Smith was the offensive coordinator at Washington. Gebbia was forced to sit out the remainder of his redshirt freshman year due to NCAA transfer rules. In his redshirt sophomore season (first eligible season at Oregon State), Gebbia appeared in four games as the backup and started the season finale against Oregon. Against 14th ranked Oregon, Gebbia threw for 243 yards and had a sixty-five percent completion percentage. Entering his redshirt junior season (2020), Gebbia was named the starting quarterback and a captain for the Oregon State Beavers. In his four games started this past season, Gebbia threw for 824 yards, 3 touchdowns, 3 INT’s and led the Beavers to a 2-2 record. In the game against California, Gebbia threw for a touchdown, ran for a touchdown, and caught a touchdown. He was the first Pac-12 quarterback to do that since 1996. Against their in-state rival, Oregon, Gebbia led the Beavers to a major upset. In that game he threw for 263 yards and a touchdown. However, Gebbia got injured on the final drive of the game while trying to complete a QB sneak for the win. The injury ended Gebbia’s season due to the hamstring injury requiring surgery.

Jermaine Burton
Since leaving Calabasas and enrolling at the University of Georgia in 2020, Jermaine Burton has made an impression on the college football world. In his first season as a Georgia wide receiver, Burton had twenty-seven catches for 404 yards and three touchdowns. Burton’s breakout week came in Georgia’s win against Mississippi State, where he had eight catches for 197 yards and two touchdowns. An impressive statline for anyone, nevertheless for a freshman in the SEC, the toughest conference in college football. Burton’s breakout game helped him earn SEC Freshman of the Week honors.

Brendan Radley-Hiles (Bookie)
Currently in his third season as a defensive back at Oklahoma, Brendan Radley-Hiles, also known as Bookie, is a staple amongst the Sooner defense. In his first year at Oklahoma, Radley-Hiles struggled to impress Oklahoma fans. The fans had extremely high expectations and Radley-Hiles’s penalties with blown coverage put bad blood in some fans of the Sooners. Most of these struggles came when the former Calabasas standout was moved to safety for the second half of the season. However, since defensive coordinator Alex Grinch took over the defense entering Radley-Hiles’s sophmore season, Bookie has performed much better. In his sophomore season, Bookie started most games and had 46 total tackles, two interceptions and a forced fumble. His standout performance came against rivals Oklahoma State, in which he had a career high ten tackles and a forced fumble. In this past season, Radley-Hiles had thirty tackles and an interception with five deflected passes.
Johnny Wilson
Unfortunately wide receiver Johnny Wilson did not receive the opportunities to perform like a top national recruit. Due to positive COVID tests within the Arizona State football program, including head coach Herm Edwards, Arizona State only played four games the entire season. In his three games played, Wilson caught 6 receptions for 89 yards.