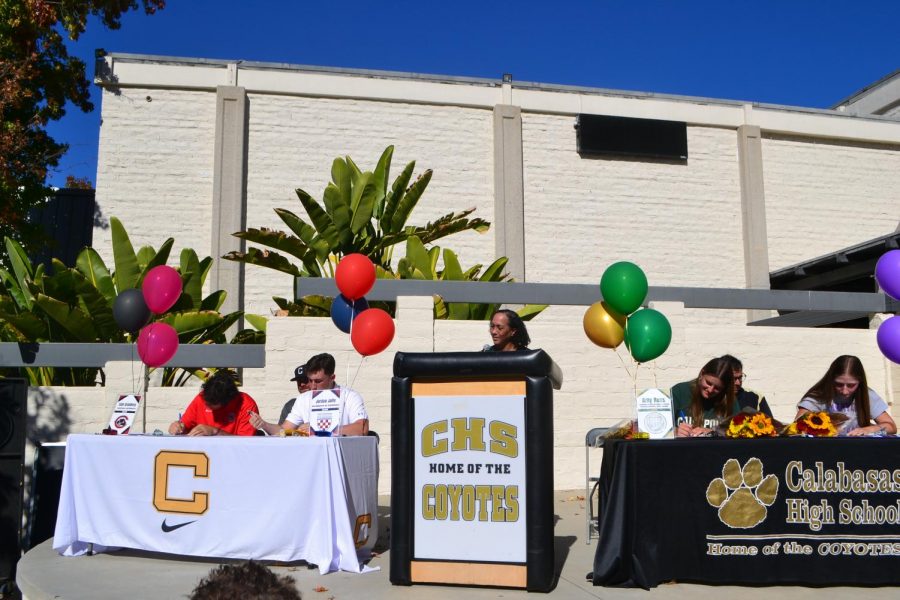 Jaffe will be going to the University of Richmond in Virginia for baseball. Jaffe, who played with the Calabasas Baseball program since freshman year, has wanted to take his skills to the college level since the start. For Jaffe, Richmond had everything he was looking for, both in the baseball program and academically.

“I want to go to a school outside of California to have a new experience”, said Jaffe. “Richmond checked all of those boxes.”

Grunberg has committed to Chapman University for baseball. Grunberg has been in contact with Chapman since the summer, but officially committed on October 12. Quite the opposite from Jaffe, Grunberg says one of the most important things to him was staying close to home so that his family could watch him play. Grunberg started his baseball career locally at West Hills Baseball and has been playing since he was four years old. Grunberg credits the CHS program and his teammates for helping him get to this point.

“From freshman year until now I’ve enjoyed every second with my [teammates]. I’ve grown so much as a player, but even more as a person,” said Grunberg.

Ross will be committing to Cal Poly for softball. Ross has been playing softball for the past 13 years and has always had the goal of following in her sister’s footsteps by playing college softball.  Ross also credits her teammates at Calabasas for helping her achieve her goal of playing at the collegiate level.

“I definitely feel like the group of girls I played with have given me a sense of the type of teammates I want to play with,” says Ross.

Messenger will be committing to Kenyon College for softball. Messenger says one of the biggest factors for choosing Kenyon was the fact that they have high academics and Division III softball. Messenger credits her travel softball team, the Crimson Waves, for the success she has had in her softball career.